Our work in Uganda dates back to 2006 when a pastor from that country visited Trinity Covenant Church in Lexington, Massachusetts.  Todd Klipp was touched by his story and over the next several months the two became friends.  In June 2007 Todd, along with two others from Trinity, went to Uganda for the first time.  Upon his return, he shared the following:

We all know the power of words; I am here to testify to the inadequacy of words to describe what we experienced in Uganda.  Perhaps one day we will be able to convey more fully, and in a more meaningful way, the power of this experience, but for now I must ask you to imagine. 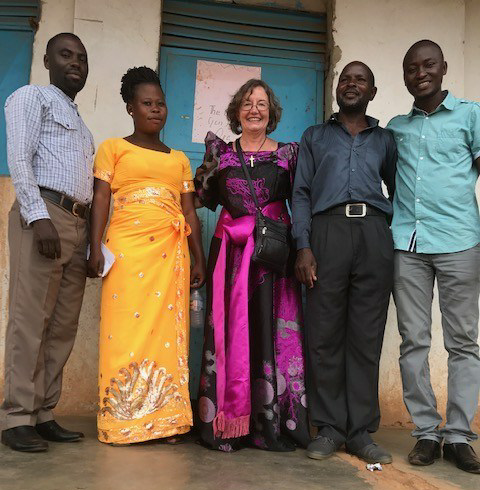 Imagine a sprawling city of perhaps 1.5 million people (though it’s really impossible to tell) beset by poverty, disease, congestion, and chaos, with vehicles – and especially people – everywhere you turn, for miles and miles.  You might ask yourself, where could God be in a place like this?  Imagine in the midst of this city a rickety looking church, consisting of tree limbs driven into the soil with boards nailed partway up the sides and a corrugated aluminum roof.  And hanging within a banner welcoming their American brothers – the only white faces there – with open arms and hearts.  A reminder that a church is not a building but rather a group of believers joined together in faith.

Imagine worship – in music, dance, and preaching – so powerful that it brings tears to your eyes.  Imagine young children kneeling at your feet in gratitude that you would journey so far just to visit them.

Imagine an orphanage located in the middle of nowhere, where 100 or so children – the victims of HIV, malaria, and other diseases – who haven’t had a good meal in who knows how long and likely have never even seen a white person before, are singing and dancing just for you.

Imagine the most loving, gentle, faith-filled people you have ever met embracing you, looking into your eyes, and telling you what a blessing you have been and how much they love you.

Can you imagine this?  If so, then you have some idea of the incredible blessing that was bestowed upon us.  As for me, there is one thing I cannot imagine: ever being the same again.

The following summer, Sandy Gannon visited Uganda for the first time along with Todd (on what was then his third trip) and two others, including Todd’s daughter, Hillary.  While there, Sandy’s heart was broken by the suffering she witnessed in the children of Bakka, a village of about 24,000 people where the average age is 15 and the average education is 4th grade. Sandy made a promise to God and the children to work every day of her life to make a difference in their lives, a promise she has faithfully kept.

Since that time, Todd and Sandy have made numerous visits to Uganda, often taking others with them.  Now, Kisoboka typically sponsors two to three trips to Uganda each year.  Over the years, our work has evolved and expanded to include several areas of focus.